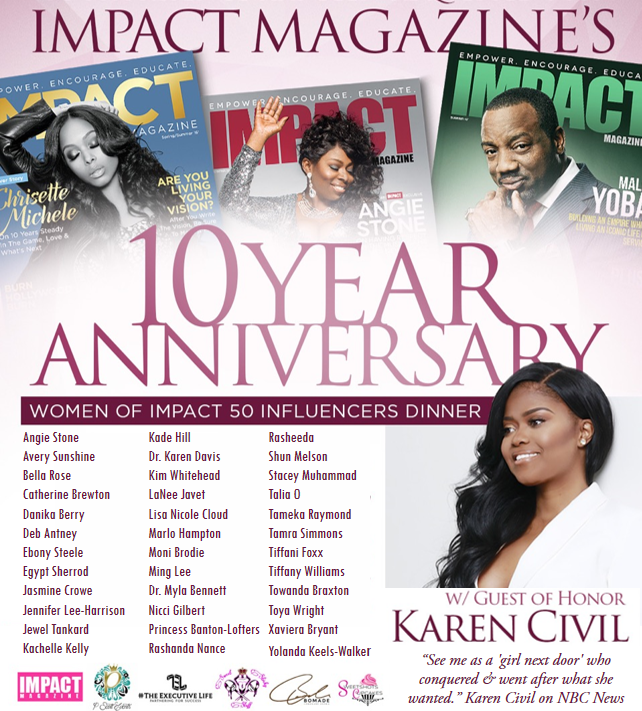 On January 15, 2017 Editor and Chief of IMPACT Magazine, Tunisha Brown, will celebrate the publication’s 10 year anniversary by hosting the inaugural Women of IMPACT Dinner with special guest of honor, social media power house, Karen Civil. For 10 years, IMPACT Magazine has been delivering news to empower, encourage, and to educate its readers to desire a greater life. Selected by Hillary Clinton to head her 2016 social media campaign,Karen Civil will grace the cover of the 10 year anniversary issue. IMPACT Magazine will pay homage to her and other influential women to display gratitude and honor for their service in their respective industries.

Selected to produce each of the nationwide IMPACT dinners, The epiMediaGroup, LLC will ensure the event remains exclusive, only inviting guests of high esteem and veterans in their industries.

IMPACT Magazine’s mission and purpose is to empower, encourage, and to educate readers through the power of images and words.This daring and aggressive publication tackles the issues of life, by giving examples of ordinary people, living extraordinary lives. IMPACT educates the readers on health, wealth, and all things pertaining to who they are; challenging them to evolve into whom they are destined to become.IMPACT has had the honor of speaking on issues with some of today’s influential thinkers and doers. Grammy nominated artists R&B Diva Angie Stone/Musiq Soulchild (The Husel), Grammy award winner Chrisette Michele, NAACP Image Award Winner and actor Malik Yoba, Internationally acclaimed singer Chrisette Michele, creator of the Rock Out With Me campaign and co-star of the WEtv’s ‘Tamar & Vince Show April Daniels, have all graced the cover of IMPACT Magazine.

Natural Hair May Be Linked To Self-Love