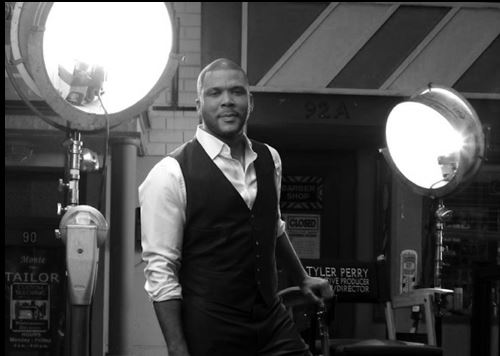 Years ago, I remember hearing Tyler Perry tell his story on how he lived in his car, not knowing where he was going to get his next meal from because he had a vision of a dream that he could not let go of. As his website TylerPerry.com mentions, “Saving every last dollar, Tyler staged the play for what he hoped would be a packed audience, but the seats remained empty. Never would he have imagined that six years later, that same play would sell out a local run, forcing the production to move to the acclaimed Fox Theatre in Atlanta, or that in 2015, his original play, Madea on the Run, would be sold out in theaters nationwide.”

Throughout all of his obstacles, the one thing that remained consistent is… he never stopped the work. He remained faithful and consistent to the dream. As I am sitting here now thinking of my own dream, I look at life and how funny she is. How this man’s story of faith and perseverance has “happened” across me at such a time as this in my own life. From his childhood to now, Tyler credits getting through the obstacles as his biggest driving force to success. He says, “My biggest success is getting over the things that have tried to destroy and take me out of this life. Those are my biggest successes. It has nothing to do with work.”

According to TylerPerry.com, he was born and raised in New Orleans, his childhood was marked by poverty and a household scarred by abuse. From a young age, Tyler learned to write down his daily thoughts and experiences in a series of soul-searching letters to himself – advice he gleaned from Oprah Winfrey that ultimately set his career in motion. Characterized by strength, faith, and determination during a turbulent adolescence, these letters provided Tyler with the inspiration to delve into writing his first play, I Know I’ve Been Changed in 1992.

I remember when he spoke on how he rented out a theatre to not have but approximately 10 people in the audience; how he still continued to press! He then saved enough money to hire Lashun Pace for his play. How he was praying that everything he desired would work in his favor. I remember distinctly how he said he heard a voice say to him to look out the window the night of the event. When Tyler looked, he saw a line wrapped around the entire building. The rest is history.

In these moments of legacy living, we (adding myself to the pile of folks as well) sometimes find ourselves ready to walk away from the gift that is given. Sometimes it is because of the tarrying, the lack of money, support and more. To be honest, seeing the way Tyler has been able to build his legacy throughout his obstacles and how he has employed a great sum of black Hollywood, it is awe inspiring. I don’t know about you, but it has put the fire under me to keep pushing towards my mark!

His story is of one in which I am personally going to continue to watch more closely to be deeply enriched by. It is in the moments in which I, like others am ready to throw in the towel, I can continue to press because of his remarkable story of faith and perseverance.

T. Marie Tells You Why It’s Time For No More Boyfriends